Jowett Jupiter  first appeared in the London Motor Show, October, 1949 as a rolling chassis, having been designed in four months by the famous (of Auto Union pre-war, and Cisitalia immediately postwar) Austrian engineer Dr Robert Eberan-Eberhorst. The tubular chassis was made from a relatively light-weight but equally-strong steel, high in chromium and molybdenum; it had been developed for fighter aeroplanes like the Spitfire. Nice for us is that it does not rust!.  Bodywork was designed (also, astonishingly in view of its complexity and beauty, also in four months) in-house by Jowett's body stylist Reg Korner, made form aluminium alloy. The first two complete Jupiters were on the road by March 1950. The third Jupiter raced at Le Mans in June 1950 and won its class.

Initially it was named the Javelin-Jupiter but after a while it was re-named the Jowett Jupiter.

First production batch of Jupiters (five) were completed at the Works September to December 1950. One was shipped to the French agent, the other four were road-test, demonstrator and show cars.

The very last Jupiter left the Jowett factory in November 1954. The Jowett factory built 827 standard-bodied Jupiters during those years, of which 733 were the Mk1 and 94 were the Mk1a.
But also a further 74 Jupiters went out as fully equipped rolling chassis normally to coachbuolder to build special bodies on them, however three of these rolling chassis later received standard bodywork making 830 the total number of standard Jupiters that once existed. It has been established that 64 of the rolling chassis are known to have received coachbuilt bodies, the fate is unknown of the others.

See below for the Jupiter's standard tool list and images showing what some of the items look like. Also below, a cmparison of  how the Mk1a differed from the Mk1.

The Jowett Jupiter engine is a good example of British engineering eccentricity. It was designed by Gerry Palmer (he also designed the Jowett Javelin, and later the MG Magnette, Wolseley 4/44 and variants) This engine was his first and last engine design, initially for the Jowett Javelin. It is a horizontally opposed four cylinder unit (Flat-Four) of bore 72.5mm x stroke 90mm swept volume 1486cc. (90.6cu-in). Compression ration 7.6:1 or 8:1 dependent upon destination country's petrol. the version for the Jupiter was developed to produce some more power than that needed for the Javelin.
The Javelin version of te enginme developed 52.5 BHP wheras the Jupiter version - same swept volume (1486cc) but higher compression and different carburettors, developed  62.5 BHP with even more deveoped for the Mans Jupiters

Overhead valves are operated by rather long pushrods from a central camshaft mounted directly in the crankcase above the crank. Camshaft end-float adjuster can be made out in the above engine-installed photograph, just below the filler pipe.

For the standard engine, maximum power occurs at 4,500rpm (Standard Jupiter Mk1, Mk1a) and 5100rpm (Jupiter type R4 which had a slightly raised 8.5:1 compression ratio). Crank is 3-bearing hardened type. The crankcase block is of aluminium alloy split into two halves vertically down the centre-line so that the main bearing housings (and the camshaft bearing housings) are half in one side, half in the other, with some big big bolts clamping both halves of the crakcase together.

The cylinder heads are cast iron - fortunately for us 70 or more years on as this makes them relatively easy to repair and convert to lead-free petrol. Oil filter housing is a separate casting bolted to top of engine block via an obtuse-angled vee - always a conversation piece as it is such fun to keep oil tight. The water pump is perched above the engine as a separate unit that also carries the fan spindle, thus the water pump has to suck hot water from the engine, or more correctly, cylinder heads. Since the pump is joined to the top of the engine via a small piece of hose, and since the pump is triangulated to the dynamo and engine for fan-belt tensioning, you have to ensure that the pump does not get too close to the distributor. Radiator is mounted above and behind the engine in a compact but unusual layout.

Nevertheless the Jupiter's power of over 60 genuine BHP was quite good for the period from only 1486cc. Good enough for 10 major victories in three in-era seasons.

Compact transmission (gearbox), as designed for the Javelin,  is a separate unit from the clutch housing. It offers 4 forward ratios (synchromesh on 2nd, 3rd and top) plus reverse. Gear lever is steering-column-mounted. the gearbox ewas initally made by an outside contractor, meadows, but later Jupiters had Jowett-built interiors.

Steering is by a solidly mounted rack-and-pinion unit, rare for it's time. As a result the steering is light and positive.

Apart from the very early Mk1 Jupiters, the Girling brakes are all-round hydraulic with twin leading shoes at the front. Very early Jupiters were hydraulic leading/trailing at the front, mechanical rear, which meant that should the hydraulics fail you still had some braking! Brake shoe area is very adequate except for fast mountain descents with heavy braking, when fade can be experienced.

The single bench seat accommodates two, but can accomodate three. It is upholstered in leather (colour either a mid-tan or Bordeaux) while the rest of the interior is covered in a matching ambla (rexine). Winding windows are provided. The hood folds out of sight behind the seat, and can be raised rapidly in the event of a sudden downpour. Hoods are either beige (all body colours except white) or black (white bodies only). White cars had Bordeaux interiors only. Red cars had mid-tan interiors only. Other body colours could have either of these two interior colours.

It is confirmed that 897 cars (all bodies) were built on the Eberhorst Jupiter frame. But another five MAY have been built, making the maximum possible the total of 902 cars on the Eberhorst Jupiter frame. A good few had coachbuilt bodies, as during 1950-1951 production of standard Jupiters was slow. Also for 1952-1954 the Monte Carlo Rally no longer allowed open cars, but for those years it did allow coachbuilders saloon-bodied cars on the chassis of standard open cars, so some FHC Jupiters were built with the Monte Carlo Rally in mind.

It is known that 829 standard-bodied Jupiters once existed, of which a good 50% still exist in some form. many well-restored and running.

These diagrams are of the Jupiter Mk1a version, taken from a 1953 AUTOCAR magazine.

The dimensions in the above diagrams are in inches, with the seat in its central position. Jupiter Mk1 boot locker is 25 inches x 10 inches x 31 inches

The main differences between the Mk1 and the Mk1 are:

Spare wheel storage - For the Mk1 is reached through a special small door at the rear, but in the Mk1a you have to unload the boot as it is under the boot floor..

Hood (soft top): Mk1a hood was raked further back than that of the Mk1.

Instrument Panel: Mk1 - walnut veneer panel with recessed instruments in direct view of the driver. Mk1a - metal panel painted body colour with chrome bezel instruments placed central to the car's axis. This panelwork made it much easier for RHD and LHD Jupiters - just swap the rev counter and the speedometer - so photo below

In sum, the Jupiter Mka has the externally accessible larger boot, and is even rarer than the Mk1 and of course had all the latest mechanical updates. The Jupiter Mk1 has a nicer instrument panel, instruments, and instrument layout, and greater legroom and tankage - and is still pretty rare!

The Jupiter R4 was speed-tested at MIRA (Motor Industry Research Association) test ground at Nuneaton. It just exceeded 100mph with overdrive top engaged and the hood removed. It was the cheapest 100mph car at the 1953 London Motor Show.

Here is the list of tools, issued by Jowett Cars Ltd with every new Jupiter - this actual list went out with Jupiter E1 SA 563R on 23 January 1952 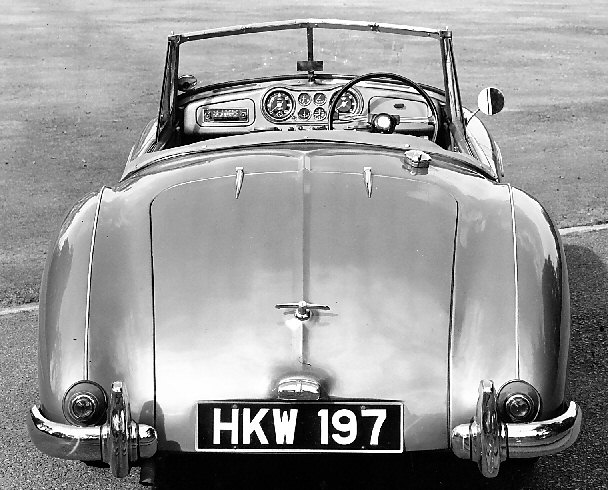