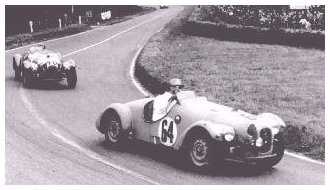 Neither finished - it was left to the Jupiter R1 of Marcel Becquart and Gordon Wilkins to take the class-win honours.

You might notice Gatso's  foglamp of course.
It gets misty early on the Sunday morning of Les Vingt Quatres Heures du Mans
before it gets daylight.

RACE RESULTS in the era for the JOWETT JUPITER sports-car

ahead of another Jupiter and a collection of MG TCs, MG TDs and similar cars

Queen Catharine Montour Cup for 1.5 litre sports cars, Watkins Glen - USA
In September 1951 the winner of this cup was George Weaver who brilliantly drove the R1 to arguably its best-ever victory

May 1952 a Standard Mk1 Jupiter was the first true production car home in the 1500cc class, at 7th overall.

HILLCLIMB  RESULTS for the JOWETT JUPITER

RALLY RESULTS for the JOWETT JUPITER

Jupiters tried hard in the International Criterion des Alps 1951, 1952 and 1953. In 1951 Jean Armangaud took his Jupiter to win his class in the Monza Speed Test on the first day,
and on the third day Tommy Wise drove his Jupiter to class-win the Falzarego Ascent (a very high Alpine pass in Italy) with The Jupiter of Armangaud second.
On the fifth day Tommy Wise class-won the Stelvio Ascent with Armangaud third this time both in Jupiters
In the 1952 Robinson in his Jupiter lost no marks on the first two days before being forced out with brake problems. 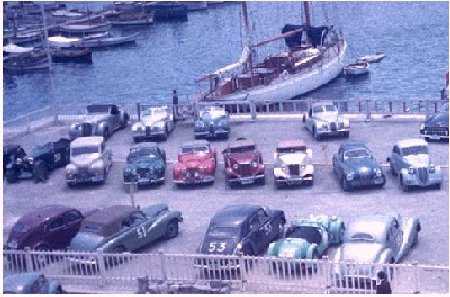 Jowett cars: a Jowett Javelin saloon car and two Jowett Jupiters alongside two MGs, in front of friends,
at the 1951 Alpine Rally start at Marseilles.

Do you recognise the cars that aren't Jowetts, Jaguars, or MGs?

Over in the USA - The Lake Tahoe Rally  was in August 1952. FCCA National Rally in the Californian high sierras.
A very tough event but there was an Outright Win by a Standard Mk1 Jupiter driven by Hunter Hackney.

And in HSCC competitions in the 20th and 21st centuries, the Jupiteer continues to excell.- Australian Joe Caudo was timed at 106mph in a Targa Tasmania pre-2000 event