Part of the magazine page of the definitive Jowett Jupiter website

The Jowett Jupiter Magazine section up to 2005

The late Summer (early Autumn?) 2005 Cornish weekend. The Jowett Jupiters visit to the Eden Project has now come and gone.

Jupiter car seen near Croydon, South of London, for the first time in 40 years when it had been laid up under sheets. It has now changed hands and is to be restored - when time permits as one says.

On Sunday 25 August 2004 Pat Lockyer took his well-restored  Farina-bodied Jupiter  to Lyme Regis to the RNLI day, the Milestone Car Club  had a display of cars on the prom, Jaguars Mercs etc. Pat's trophy was for the most desirable car, the Farina Jupiter.

We always knew it would create interest and it certainly does. 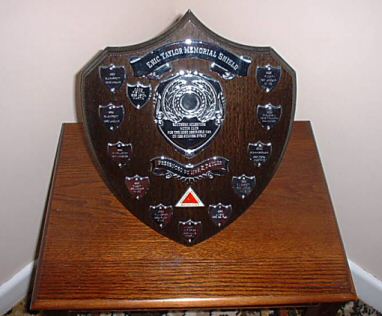 Recent photographs taken in 2004 - see below.

Top left, Roy Watling-Greenwood, who in 1953 superbly built single-handedly the special bodied Jupiter originally registerd so known as GAP 6 - an almost exact replica of standard Mk1 Jupiter. The remaining 5 photos were taken at the recent Ardingly Festival of Transport.

Centre left: Mrs Joyce Swayne, widow of the man who bought a Jupiter in 1953 when it was 6 months old. The family still have the car!

See further below for pictures of the unsheeting of this car.

The standard Jupiter shown immediately below is owned by John Hodgekinson, who is also responsible for the oil cooler installation top right.

Below is a picture from Keith Clements of  Sweden's British Car Event at the beginning of June 2004:

Above:  the Jupiter of Peter Hewitt of Dals Rostock, Sweden. Ian Glass writes that four Jowetts were there, three from Scandinavia and the Jupiter of Keith Clements from the UK - well done Keith! And thanks for the photos!

The Spring 2004 Classic Car show at Bristol (UK) featured Pat Lockyer's Farina Jupiter on the Jowett stand.
As you can see it attracted a lot of interest... 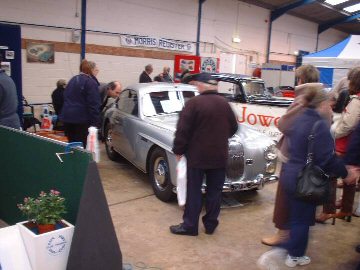 Yorkshire's Ilkley Jubilee Rally for classic cars was on Sunday 4 April 2004. It was the usual format 150-mile road rally with regularities and special tests at various venues.
Mike Smailes drove his Red Peril rallying Jupiter. He reports "Had another good day rallying and despite the mixed weather the car went well.
Mike Smailes finished seventh overall at second in class,  just pipped by last year's winners, the TR3 of John Ball.

Sunday 11 April 2004 Flying Day at Henstridge (at the Henstridge airfield near Wincanton, Somerset)) with Tony Young's SC Jupiter while John Blaze studies it 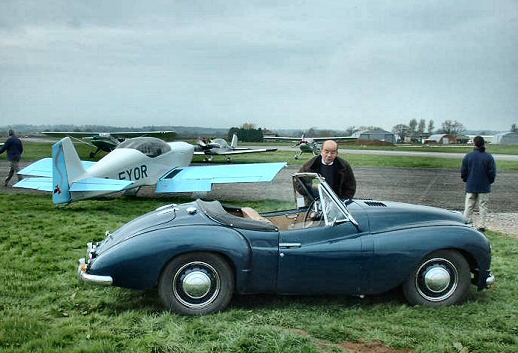 More on the Netherland Tulip Rally 11 to 17 May 2003 for Classic cars, which featured John Blanckley's rally Javelin driven by Hugo van Zuylen van Nijeveldt (who had the outright winner in the 1953 Tulip Rally  in his own Javelin). Navigator in the 2003 event was  Keith Clements. 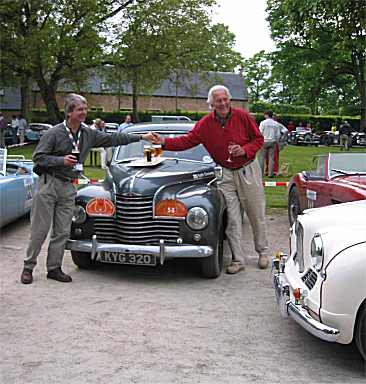 Below are four pictures of the Jaak Jacobs recent restoration. Almost all his own work, from a dreadful wreck of a car a beautiful Jupiter has risen again

(it is now on the road). Scroll about half-way down to see some earlier pictures of the same machine. 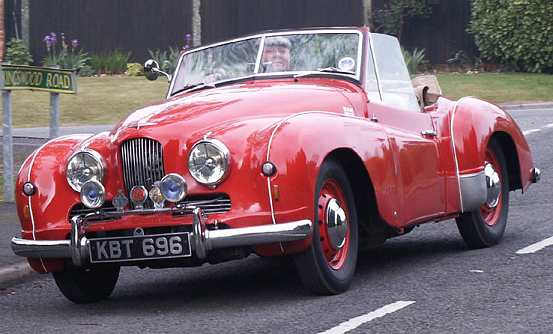 Below are the four Jowett Jupiters of Pat Lockyer - all in road-going order  to say the least !! 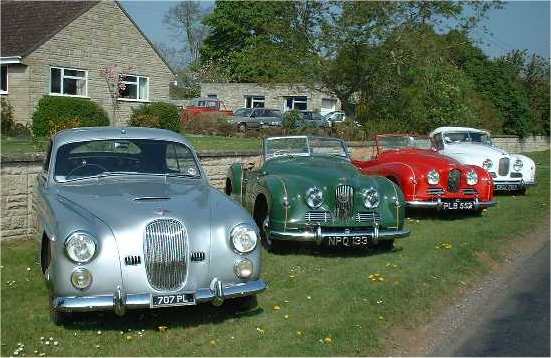 The discovery of 2003 in California: a Jowett Jupiter in single ownership since 1955 recently bought by the astute Scott Tisdale. Although it has a replacement soft top and has possibly been resprayed some time in the past, it is is a typical and quite original late Angell Motors Jupiter.
Scott Tisdale is already beginning to acquire the parts he needs to get it running again after its long lay-up. 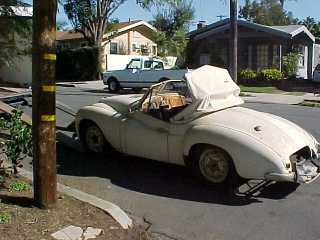 Huntley Perry of Maryland USA has probably one of the most original restored Jupiter anywhere in the world, following the most careful research. A rare sight in Jupiters these days is the authentic tool locker. The pictures below (top row) show it in Huntley's car...whilst in the bottom row we see the cover for the reserve fuel tap, again closed and open. The reserve tap was deleted for 1952.