Thursday 1 August Four Jowett Jupiters arrived Denmark by ferry from Harwich:- The Jupiters were of  Keith and Jenny Clements, David and Barbara Peacock, Angus and Shirley Bell, and Mike Smailes. Also two Jowett Javelins with Duncan Laing (and Jim Miller) and Geoff McAuley. But then Richard and Andy McAuley came by BMW. They were met by Poul Bertelsen and his daughter and some other Danish people. After some mechanical work on some of the Jowetts, everyone drove to Hotel Gudenaen in Torring. Later the Jowetteers visited the Poul Bertelsen place at Lindved where he showed his cars, then back to hotel Gudenaen to eat and sleep.

Friday 2. August the Jowetters, all together, left to visit Egeskov castle. and after some small problems with cars and maps Poul Bertelsen was a great help here. Had lunch  there. About 2 p.m.we all went to Fredensborg  to stay on an hotel called Country House. Then there was a small Danish BBQ in the evening in DVK Car Club in Niva together with Niels and Hanne Jonassen and some Danish owners of old cars.

Below top row: At the Country House Hotel

Below bottom row: At the DVK Car Club Niva

Saturday 3 August  10.15  Bus tour in a 1953 Renault Bus. This was a tour of Copenhagen with a guide, starting at the Air and Car Museum. There we Jupiter people saw the Sommer-bodied S1 car with a Bradford engine and some more special Danish-built cars and many aeroplanes. Then we took the coast road to Copenhagen and our guide, Claus Neble, showed us the whole town and some churches and a little car  museum in Christiania where the Sommer-bodied Jupiter is stored and soon should be running after restoration. Then we ended in Tivoli, with dinner in Restaurant Groften

Below Left to Right: the little 1953 Renault bus; lunch at Christiana; 1899 Hammel car that has done the London/Brighton Vintage Car run 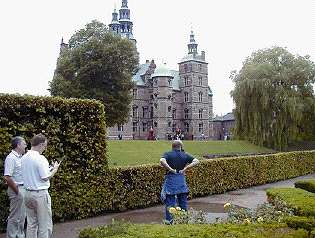 Sunday 4 August we drove the Sommer DVK run  to the Ole Sommer Car museum in aerum. Mr Sommer showed us all his cars. There were 28 old cars driving about 80 km in Copenhagen with lunch in the old town down by the river, and finishing in Carlsberg brewery, than back Gronholt and visit my Garage. Later we all drove to Helsingor Golf Club to the final farewell dinner to all who wer leaveing on Monday. Keith and Jenny and Jim Miller stayed on and visited some places in Nordsjaelland.

Below - Sommer DVK Run before the start.

Bottom row: The Javelins of Laing and McAuley, with David Peacock's Jupiter in the centre

Monday 5 August we went to meet the ferry, some visited Ib Rasmussen's company on the way.

Wednesday 7 August the ferry brought Tom Chapman and with his friend Bernard Messingham in the Tom Chapman Jowett Jupiter, and John and Pat Rutter in a modern car after problems with their Jupiter. They proceeded to the Country House Hotel.

Thursday 8 August  Gustav Josefsson arrived in his Jowett Javelin and together in the modern bus we did the little Copenhagen Tourist Tour starting in Ib's garage. Then again to Copenhagen with Claus Neble and again he showed us his garage. Then we saw again the Sommer-bodied FHC Jupiter on E1 SAL 500R the only LHD special-bodoied Jupiter, and the Ole Sommer Museum in Naerum where there are 1 Javelin 1 Jupiter 1 Bradford and a special Sommer car with the Bradford engine, and about 35 other old cars. In the evening we dined at Bakken (a mini Blackpool, Tom said).

Below: Two views of the beautiful Sommer-bodied FHC Jowett Jupiter. The only LHD special-bodied Jupiter ever built - it on chassis E1 SAL 500R and runs well.

Below Left: Dinner at Bakken in the sunshine; Right: at St Saviours Church

Friday 9. August altogether two Jupiters, one Ford Cortina of our guide Claus Neble), and a Japanese car left for the Citroen Car dealer in Slagelse. Then we crossed the long bridge and had lunch with a great view over the sea. Later Egeskov and a car museum, we now found car heaven upstairs an attic full of unrestored cars! About 5 p.m. we all went to Munkebjerg Hotel some visiting Poul Bertelsen Lindved and the day ended at a McDonald's to a late fast food dinner.

Photos below - Top row: Keith Clements filling up his Jupiter; a happy Claus Neble our guide

Bottom row: Left - in Poul Bertelsen's garage and his Jupiter; Right - the Jupiters of Keith Clements and Tom Chapman

Saturday 10 August was the  Munkebjerg-run.

One hundred cars left from the hotel in groups, there was a Jupiter, and for the first time some yankee tanks and a little Fiat 500 - there was some competition for cars and drivers, driving in some of the most beautiful countryside in Denmark; we stopped for coffee and lunch. The Jupiter-owners group did not win but a prize was won by Tom Chapman for his many Km driving before coming here, he gave it (a cookbook) to Ib Rasmussen after everyone signed it. The organisers must have been pleased because everyone was invited to next year's hill-climb. Saturday evening us Jupiter folk were invited to a big dinner in Hotel Munkebjerg an some ended the day in the Casino.

Photos below:- Top Row: the only (for the moment) Danish running Jupiter (which was new in GB and has since returned there); lunch-stop at Vejle Centre Hotel; a child with a dream!

Sunday 11 August  Following breakfast, Jupiter people said their goodbyes after some great days, and Claus Neble (our guide) drove his Cortina the 350 Km back home.