For 2012, the Jupiter Owners Auto Club (JOAC) 50th anniversary year
(its golden jubilee), there was this countrywide  'Jupithon'

which ran from 4th to 7th September

Jupiters travelled over 900 miles around the UK rather like the athletes with the Olympic Torches - as the London Summer Olympics had been held in the August of 2012 with a torch carried around the country from 19th May to 27th July.

So, in the Jupithon, a flag (a purpose-made banner with the club's emblem) was carried in a Jupiter and transferred at the end of each stage (leg) to the next flag-carrying Jupiter. There were 25 stages (legs) with 30 Jupiters involved, at least two Jupiters per stage with some hand-over at places of classic car interest.

Here is the itinerary. The end-point was the main JOAC event in York, the 'Jupilee'.

The Jupithon was successfully completed with no hold-ups.

Start point: outside the Castle Museum, Eye of York, York YO1 9RY. Departure 09:30. Two Jupiters then travelled to the Croft Race circuit (Dalton-on-Tees DL2 2PL) arriving at 11:00. The flag then departed in the one and only Mk2 Jowett Jupiter !  for Bradford, Yorkshire, to the Morrison supermarket (which is at the former Jowett factory) at 275 Bradford Rd, Idle, Bradford BD10 8EG). It arrived at 13:10. It then departed at 13:40 for Gawsworth Hall (Church Lane, Gawsworth, just south of Macclesfield) and arrived at about 15:30, where the Jowett Car Club provided a 'guard of homour'. The Jupithon then departed at 15.50 for the Llangollen Motor Museum at Pentire Felin, Llangollen LL20 8EE, arriving at about 17:30. Next, the Jupithon departed Llangollen for the overnight stop at Church Stoke, Montgomeryshire.

Images below: first hand-over point at the Croft motor-race circuit. On the left, the white Mk2 Jupiter correctly built by the gifted panel-man Allan Fishburn

The Scottish spur which started at Elgin in the Moray, went to Blair Atholl, Perthshire, then Edinburgh, then finally joined the others at the Elvington finish on September 7th.

Below: the start of the Scottish leg at By Blair Atholl, Perthshire.

Morrisons Supermarket, at Idle, Bradford (which is at the site of where the Jowett factory once was)

The Jupiters of the Jupithon headed for Ludlow Castle Square, Shropshire, arriving at 09:30 a.m..

and the white standard Jupiter of David Kennedy 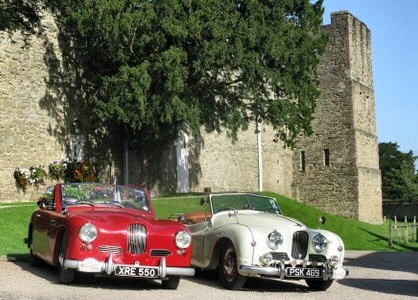 The Jupiters then departed for Ross on Wye,  the Royal Hotel - and arrived about 11:00 a.m., departing at 11:20 for the venue Circular Drive, Sneyd Park, Clifton, Bristol arriving about 13:15 at Sneyd Park, Bristol, with Jupiters of Brian Cole, Nigel Woodford and Pat Lockyer,

and in the right-hand image you might make out the Clifton Suspension Bridge.

Below, the Jupithon before its departure at 13:30 for Sparkford in Somerset

and the Haynes International Motor Museum where it arrived at about 15:00. 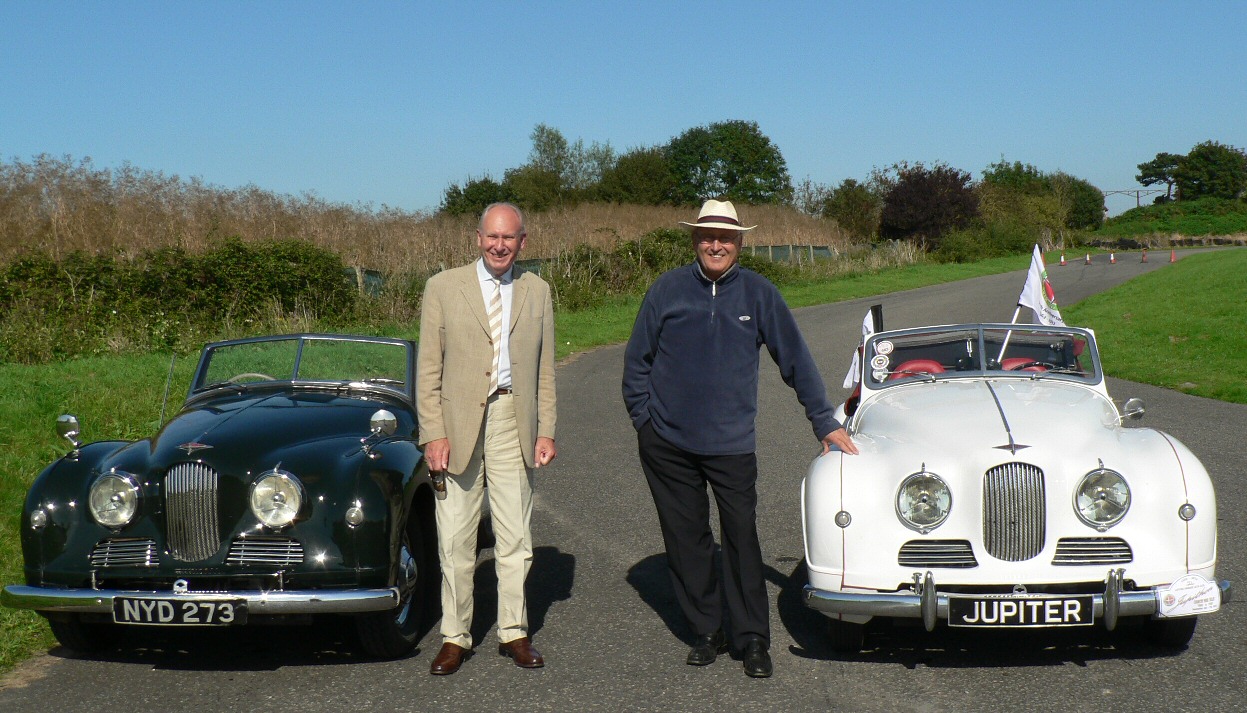 From there the Jupiters drove to the National Motor Museum at Beauilieu arriving at 17:10,

departing about 17:30 for the overnight stop at Eastleigh. 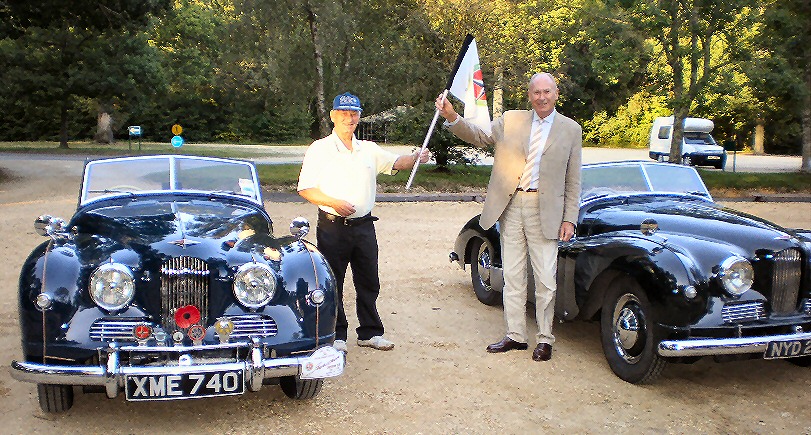 Above: at Sparkford, Somerset, with Tony Day and Pat Lockyer, and their Jupiters

The Jupithon departed Eastleigh for the Liphook Travelodge on the A3, arriving there at 09:10 a.m., then departing at 09:20 for Reigate Hill car park, which is  is located close to the J8 of the M25 on its south side. It is close to the National Trust's Reigate Hill and Gatton Park.

Image below left:- at Liphook. Roy Hickman hands the flag to John Blanckley.

Image below right -  at Reigate Hill. The red car is the FHC Jupiter whose first owner-driver was John Willment - here owned and driven by

and the Thurrock Service Area.

Below: Keith Patchett with the white R4 Jupiter and Andy Stevens with the red Willment FHC Jupiter

which is the home for the Shuttleworth Collection, where it arrived at about 15:45.

The Jupithon then departed for Sywell Aerodrome (between Northampton and Kettering) where it arrived 17:30 then left at 18:00 for its overnight stop at Kettering, Northants.

The Jupithon visited the Newark Air Museum, at the former RAF Station at Winthorpe at 11:00. It departed 11:30 for the Robin Hood Airport, home of the last flying Avro Vulcan bomber in Hangar 3, arriving at 12.30, where we had a photo-shoot with three Jupiters around the Vulcan! The flag hand-over was there.

The Jupithon then departed for the Yorkshire Air Museum at Elvington, arriving about 15:30

to be joined by the spur of Jupiters from Scotland.

Elvington was the termination of the Jupithon...

...after which the Jupiters all met up in York which was just seven miles away, for the 'Jupilee'.

The 'Jupilee' event celebrated the 50th anniversary of the Club. There was also the JOAC AGM at York.

with the AGM in the afternoon. In the evening there was the annual JOAC members' Dinner.

On Sunday the Jupiters toured to Castle Howard, the stately home in North Yorkshire, for prize-giving,